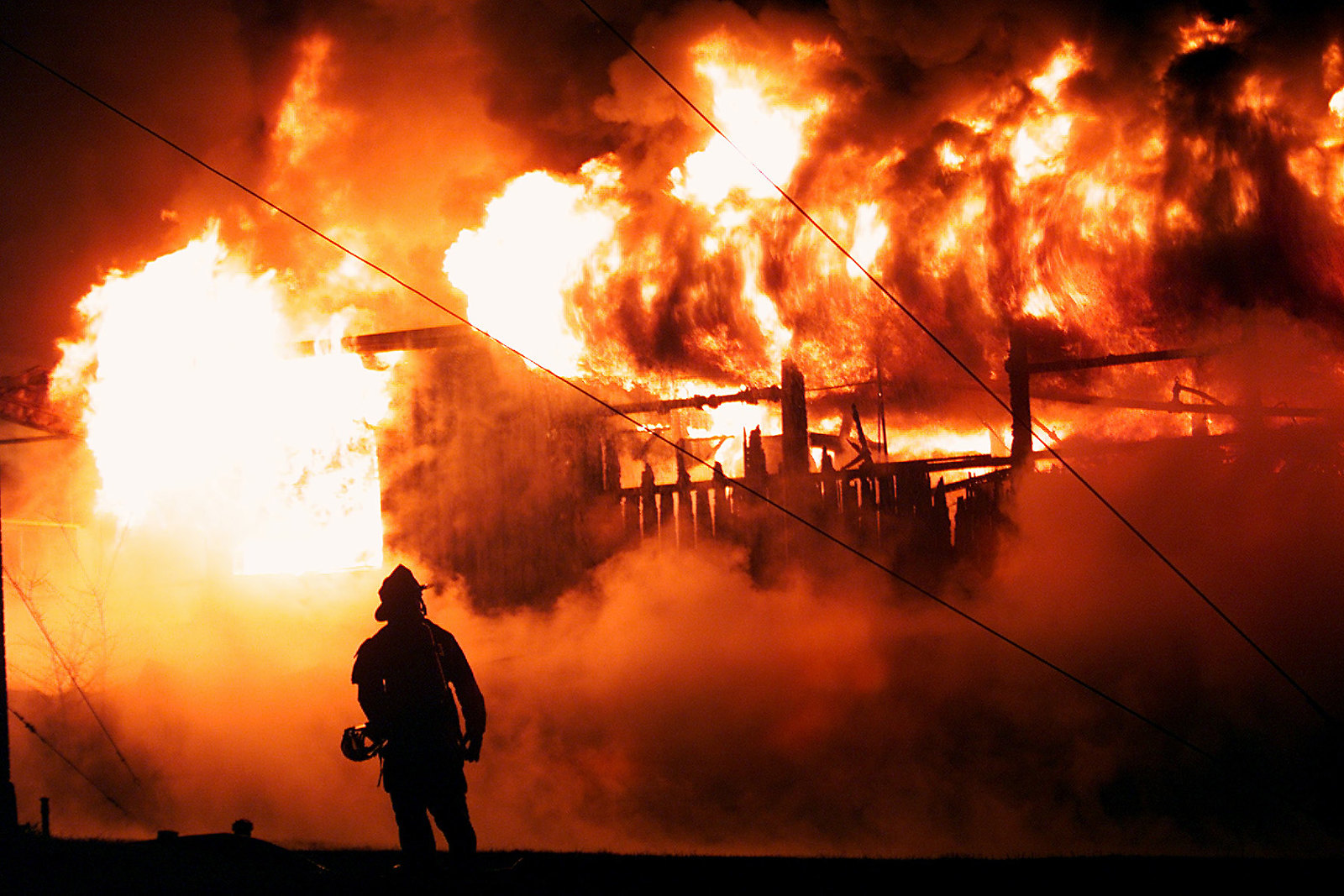 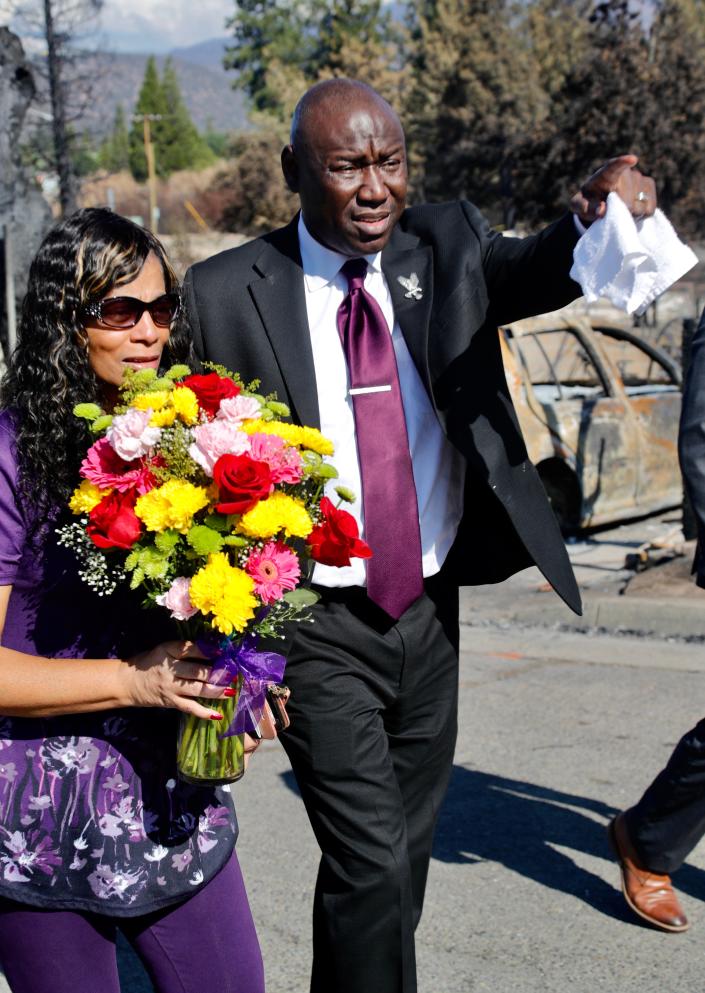 A call for broad compensation is becoming the theme for the predominately Black community of Lincoln Heights whose residents lost their homes — and the lives of two women — in the Sept. 2 Mill Fire in the Siskiyou County city of Weed.

American civil rights attorney Ben Crump and his legal team visited Weed on Friday where he heard from fire victims at a town hall meeting at the Wayside Church of God in Christ.

Crump, who was the attorney for the families after the deaths of George Floyd and Breonna Taylor, said he represents several dozen people who live in Lincoln Heights, which was largely destroyed when the Mill Fire ripped through the neighborhood.

« We’re here to make sure the Lincoln Heights community gets equal justice — that’s the most important thing here. Not just in the legal sense, but in a real-life sense, » Crump said prior to the church gathering.

Aside from a loss of a sense of community, victims lost family heirlooms such as wedding pictures, baby shoes and family Bibles that Crump said « chart our generational existence. »

Two women were killed in the blaze: 73-year-old Marilyn Hilliard and 65-year-old Lorenza Mondoc Glover, both of Weed.

Earlier in the afternoon, Crump accompanied Blenda Clark Long as she prayed with family members and placed a bouquet of flowers at the home of her aunt who perished, Marilyn Hilliard, and uncle, Clardies Hilliard, who was flown for treatment to UC Davis Medical Center’s burn unit. The blaze also injured two other people.

Blenda said she contacted Crump’s office and he flew from New York for Friday’s appearance.

« It’s devastating to see, » Long said of the fire’s destruction. « It’s beyond devastation to see here in person — everything that has transpired. We need some justice for this. »

Crump said Friday he wants to bring awareness of the Mill Fire’s devastation to the highest levels of government, noting how Black communities often are marginalized.

« That’s a common concern for many minorities, that they won’t get equal treatment, » he said. « We certainly will talk to federal authorities to say, ‘Don’t just sweep this under the rug. We want you to take a look at this. Lives were lost. People’s lives were devastated.’ »

Crump said he’ll tell authorities that « however you would treat citizens in the most affluent community, we want you to treat the citizens of Lincoln Heights the same way. »

Several dozen fire victims spoke at the town hall where Crump heard them say how tight-knit the Lincoln Heights community is. Residents would look after each other, bringing firewood to those who were without and buying tires for people who couldn’t afford them.

They also described harrowing escapes from the fast-moving blaze with one man crawling to safety and others barely getting out alive.

Olmstead said United Way isn’t involved in the litigation, but instead will help residents in the recovery process.

« We are here … for the needs in between to assist the community. We’re not going to go away until the job is done, » he said.

The Mill Fire scorched 3,935 acres and destroyed 118 buildings before it was fully contained on Sept. 13.

On Sept. 7, Roseburg Forest Products Co. of Oregon announced it was investigating claims that a water-spraying machine used to cool ash at its veneer mill in Weed ignited the inferno. Officially, the fire remains under investigation by the California Department of Forestry and Fire Protection.

More than 100 people are suing the Roseburg for losses caused by the Mill Fire, including Lorenza Glover’s son. Others are suing for personal injuries, or for loss or damage of their homes or other property by the fire.

One law firm — Reiner, Slaughter, Mainzer, & Frankel — is representing 100 to 150 people suing Roseburg. As many as 50 of those clients lost homes, mostly in Lincoln Heights and Lake Shastina. Many did not have homeowners insurance, a representative for the firm said.

« People living in this community, they were not people who could afford to pay for hotels and buy new cars and new phones, just the basic things that were destroyed in this man-made catastrophe, » Florida-based Crump said.

Several at the town hall talked about how their grandfathers came to Weed at the invitation of mill founder Abner Weed and worked for International Paper.

A century ago, the Black community in Weed numbered more than 1,000 of the town’s 6,000 residents, according to Blackpast.org. Black people came to the area to find jobs in the lumber industry. By the 1970s, that number dwindled to 500, although the town’s overall population dropped to 3,600 by then.

Mike Chapman is an award-winning reporter and photographer for the Record Searchlight in Redding, Calif. His newspaper career spans Yreka and Eureka in Northern California and Bellingham, Wash. Support local journalism by subscribing today. 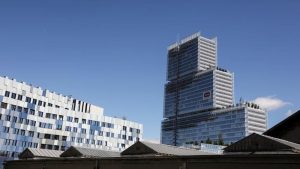